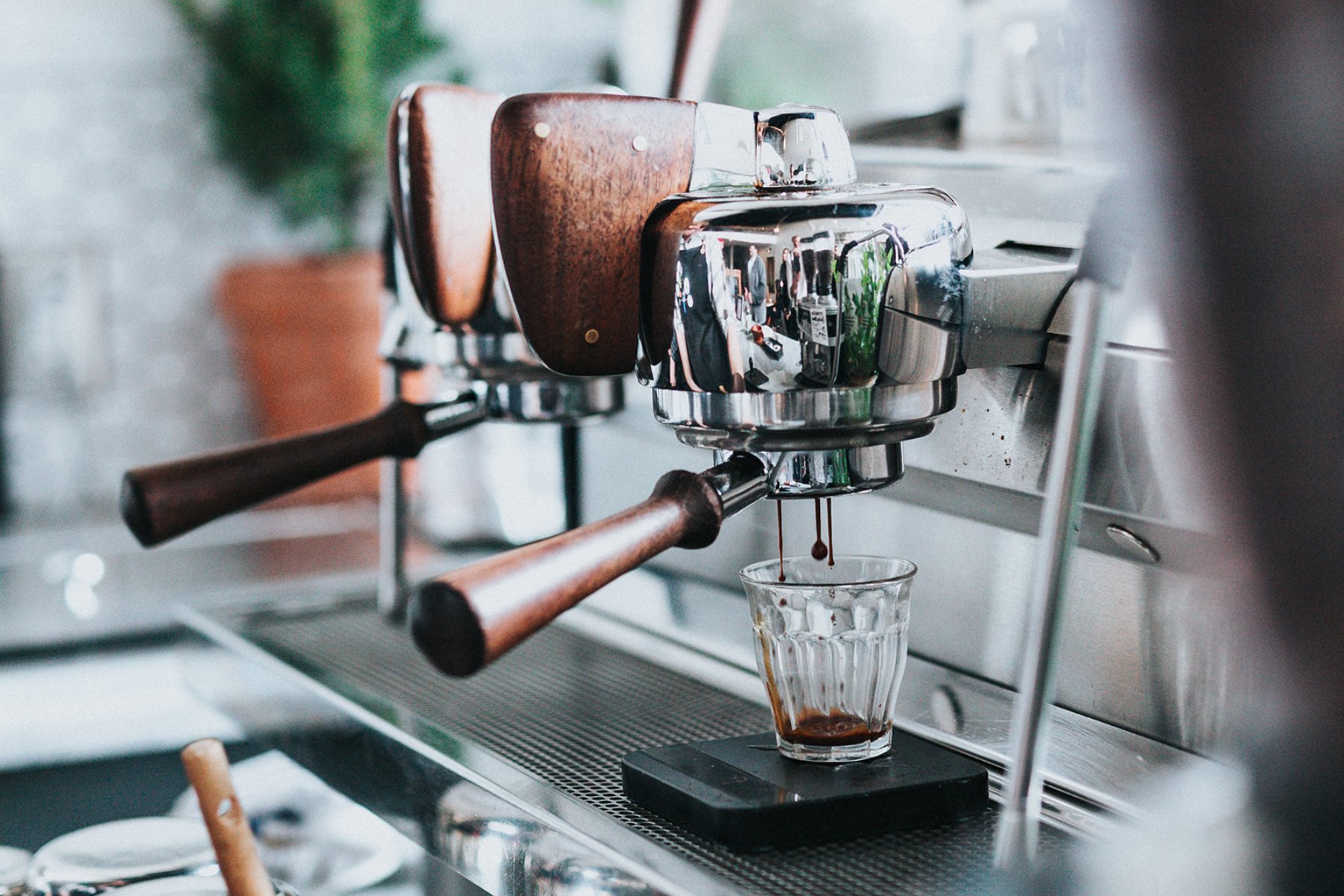 Coffee growers are directly affected by the impacts of climate change. Coffee is a delicate crop, increased temperatures are reducing farm productivity and greater humidity is making crops more susceptible to disease. The more climate changes occurs, the harder it is for coffee producers to produce specialty coffee in sufficient quantity to meet demand and to earn a livelihood.

A cup of milky coffee, such as a flat white or a latte, has a rather heavy carbon footprint of circa 250 grams – the milk being the most significant contributor.

Excluding milk and narrowing our focus to just the coffee: the coffee is grown, picked, processed, packaged and transported for export from a port. Then, once green coffee is landed at the docks in country and stored in a warehouse, it is transported to a roastery, roasted, packaged, transported yet again, ground, made into a brew, and then served and drunk.

The combined emissions from arrival to docks to cup typically accounts for two-thirds to three-quarters of the coffee’s entire carbon footprint. As the majority of emissions are generated by its making and drinking, not its growing, it largely falls to us – the coffee makers and drinkers – to make changes to ensure coffee’s survival and future prospects.

The purpose of this article is to explore how we can reduce coffee’s carbon footprint by tackling the emissions caused by coffee making, which academics and industry bodies concur is the most carbon intensive activity from crop to cup – typically responsible for over 50 percent of a cup of coffee’s carbon emissions.

Why is coffee-making so carbon intensive?

Coffee machines typically use a lot of energy to heat a small amount of hot water, and are commonly the most energy intensive appliance in a coffee shop.

There have been significant technological developments in espresso machines over the past decade. Machines now benefit from greater temperature stability, more precise dispensation of hot water, and integrated measurement.

Manufacturers have been motivated by user demand, and have responded to baristas adding after-market technologies such as PIDs, shot timers, scales to their existing machines. The integration of these features has greatly lifted the average cup quality, primarily because it is now easier to make espresso to a specified recipe at speed.

This is neatly highlighted by a change in meaning from ‘customising’ an espresso machine originally meaning the addition of after-market technologies to it now largely meaning exterior decoration through decals, powder-coating, and wooden accessories.

Espresso machines, however, have not become more efficient. With a primary focus on dispensing a small amount of water at a precise temperature, there has been less consideration given to how to use as little electricity as possible to achieve this objective.

Presently there is a lack of industry information on espresso machine energy consumption, and pretty much no direct comparison information between brands and models. Several academic studies have measured electricity consumption in real-life settings, and they range around 12 – 50 kWh per day, over twice as much electricity as an inefficient commercial dishwasher.

The wide range between 5,000 and 20,000 kWh is as much dependent on the espresso machine make and model as it is on its usage as there is often only a modest difference in power consumption. For example, one study identified the base-load as 550W, low usage at 625W (+14% over base load), and peak production at 880W (+60% over base load). In practical terms an espresso machine left on, but largely unused, is going to have a carbon footprint well over half compared with one used intensively for eight hours each day, despite producing few cups of coffee.

The significance of the base load makes the per cup carbon calculation very sensitive at low volumes, the carbon emissions per cup dramatically shoots up. So using the UK conversion factors, and assuming 300 coffees per day, around ~30 grams of carbon dioxide is produced per shot in what might be deemed a typical, busy coffee shop – circa three times the embodied carbon in a single-use take out cup.

This is a useful insight because it highlights the urgency of increasing the efficiency of coffee making equipment, and illustrates that lowering coffee’s carbon footprint is going to take both technological change and behavioural changes.

To tackle coffee’s carbon footprint, espresso machine manufactures are going to need to design new machines that use less electricity. On the face of it, this shouldn’t be too hard. Many espresso machines have limited insulation and one study estimates that over 50% of the energy consumed is lost as heat. Other developments probably include smaller boilers, small heating elements, and new boiler technologies. Since flash heating water is generally more efficient, it also seems reasonably to anticipate a forthcoming generation of flash-heated espresso machines.

There’s great scope for rapid change as many espresso machines offer greater performance than most users require. This is the coffee equivalent of having a sports car to make a trip to the supermarket. While initially, more energy efficient technologies might offer less precision, we think that this is unlikely to result in a reduction is cup quality as espresso machines are no longer the weakest link in cup quality. For example the condition and cleanliness of the machine are generally more likely to have an adverse affect.

A new focus on efficiency would also help curb the current features arms race in espresso machines, and support a renewed focus reducing maintenance and running costs and increasing uptime. Factors which are good for both coffee businesses and the environment.

The equipment manufacturers have proven to be highly responsive to the needs of their customers, and if the coffee community wants espresso machines that help ensure the future survival of coffee, they’ll build them. Right now one of the greatest differences baristas and business owners can make is to signal their interest in more energy-efficient espresso machines to their favourite manufacturer.

While we await a new generation of espresso machines, there are changes we can make today.

Starting with the greatest potential saving, and the most contentious issue. Most espresso machines are not used for half the day, and yet they continue to draw significant amounts of power. As a starting point it makes sense to turn off your espresso machine each evening. In practice, a number of manufacturer brands and many engineers prefer machines to be left on so that the machine doesn’t heat and cool. If you are not able to turn your machine off overnight, at least consider activating its power-saving mode (if it has one).

Two-group machines use significantly less electricity than a three-group as they benefit from smaller boilers and smaller elements. Since many shops don’t require a three-group machine, invest in equipment that’s right for your business. A smaller machine has the additional benefit of freeing up counter space.

Our guide to buying an espresso machine

Think of your espresso machine as the least-efficient way to make hot water in your shop. For example, the tea spout commonly draws hot water from the energy-intensive steam boiler, and a valve mixes cold water from the intake to produce the desire temperature. Ideally purchase a specific hot water boiler for tea preparation, and minimise the tea spout’s use. Also, don’t use the tea spout as a general use hot water tap. As fate would have it, I’m writing this article in a coffee shop that’s pulling off jugs of hot water to polish the cutlery, a task better performed by a kettle.

Similarly, just use steam wands for stretching milk. As an industry we need data on whether standalone milk stretching devices are more or less efficient. It’s possible to see a scenario where future espresso machines are solely used to prepare espresso, and there are separate machines for milk and hot water.

Purging is an important part of maintaining a clean group head and there has been significant focus on training baristas to adequately purge between shots. However, since more hot water is commonly dispensed during purging than espresso preparation, it is worth considering ways to reducing the volume of water used in the purge. More work needs to take place a be able to make a recommendation, but it’s likely that a couple of seconds is sufficient when combined with regular cleaning.

There is a new generation of more energy efficient espresso machines coming to market, such as Victoria Arduino’s Eagle One which the brand reports to lower carbon emissions from energy consumption by 30%. A number of equipment manufacturers have been measuring the energy consumption of their machines, and now we need an industry standard to be able to compare machines energy efficiency, such as consumers benefit from when buying home appliances.

The European Commission has started work on a standard for domestic machines, and the direction of travel suggests a commerical machines will both come to benefit from increased regulation and greater transparency of their energy efficiency.

A word of warning for those looking to upgrade their existing machine to reduce their carbon footprint. A study performing a lifecycle analysis of coffee machines estimated the working life to be seven years, and that the carbon footprint increased if the machine was upgraded before five years, despite the greater energy-efficiency of the new model. While the study does not directly apply to espresso machines (Quantis, 2015), it establishes a good rule of thumb

If you wish to upgrade your espresso machine before its working life is complete, and especially if it is less than five years old, selling it to another business on United Baristas Marketplace is a good option.

The UK Government has committed to reaching net zero emissions by 2050 and a number of companies have set the more ambitious target of 2030. If the coffee industry is to play its part, we need to turn our ambitious into action and significantly reduce our carbon footprint, and quickly.

United Baristas has been advocating tackling causes of carbon emissions that either are easy or significant – and ideally both. Tackling head on the emissions causes by coffee making is going to be essential to significantly reduce our industry’s impacts, but it’s going to take commitment, research, investment and our action. Let’s get started.

This article is part of a larger series exploring carbon emissions produced by the coffee industry. Find out other ways that you can reduce your coffee’s carbon footprint.

• How much energy does a home use, Ovo Energy

• This article contains a number of assumptions in the calculations, not least because there is lack of real world data of espresso machine energy consumption. As an industry we need better benchmarks based on how coffee making equipment is used in practice. As a next step, United Baristas would welcome the opportunity to work with coffee shops to measure their espresso equipment energy use so we can build a more complete picture. If you have already done some of this work, please let us know.

• The four studies referenced contain a mixture of domestic and commerical applications. This explains the majority of the variation in carbon emissions. An outlier is Salinas (2008) whose analysis is based on organic coffee production at Finca Vista Hermosa, Guatemala. Petrochemical fertilisers are a key driver of carbon emissions at origin, so organic farming methods significantly reduce impacts. His study is included because the scope of analysis more closely represents sourcing and equipment typical of specialty coffee shops; however, the study assumes greater post-roast distribution distances than would be typical in the UK.